Do you know an Ethel or a Norman? We’re guessing not.

On Monday 15 October we worked with Ancestry.ie on their latest piece of research on once popular first names that are now becoming extinct.

To discover how we can help you to tell great stories, request a story consultation here.

The piece received huge media coverage and was picked up across print, online and broadcast platforms, with the Irish Times, RTÉ Radio One, TodayFM, The Journal and the Irish Independent all covering the piece. It even got it’s own mention at the start of Googlebox Ireland, a highlight for the team involved.

Here’s how we did it.

1. It’s all about the headline

Your headline is everything when it comes to your press release. It has to grab journalists attention and make them want to discover what you release is about.

It’s always better to come up with a few options when writing your headline. Choose the best one, or maybe even amalgamate more than one.

When coming up with the headline for the extinct names piece, the team had a few options. Eventually, they settled on “Do you know an Ethel or a Norman? The name could soon die out as research reveals once popular names are quickly becoming ‘extinct’.”

This was snappy, to the point and grabbed the readers attention. But one word stands out, “extinct”.

From speaking to journalists who covered the story, this is what grabbed their attention. You can see from the coverage is was one that journalists also used in their pieces: 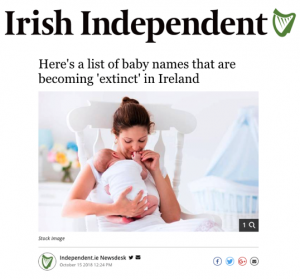 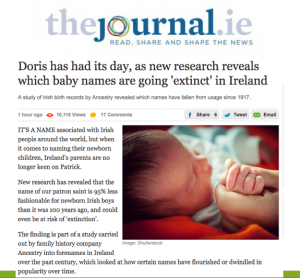 Putting in a thought-provoking and emotionally charged word attracted attention. It made journalists and then readers of the pieces stand up and listen.

Research shows that the below names are among plenty that have virtually become extinct.

Which do you think should make a 2018 come back?

It shows how one word can make all the difference.

When you have a great story, people are going to want to hear about it. One way to ensure media coverage is to pre-arrange interviews ahead of time.

This not only allows you to effectively manage your time on launch day but also have guaranteed media coverage already secured.

The team working on this story contacted radio journalists a day or so ahead of the press release being sent. They let them know about the story and that it would be in the papers on Monday and asked if they would like to schedule in an interview with an available spokesperson ahead of time.

This tactic proved successful and requests for interviews came flying in.

This gave the team a chance to prepare and also gave them an insight into the success that was to come.

Knowing the perfect time to pitch your story can be the difference between getting a lot of pick up and getting none. When press releases are associated with specific dates or celebrations this can be easier, but then they’re standalone pieces you have to pick your moment carefully. 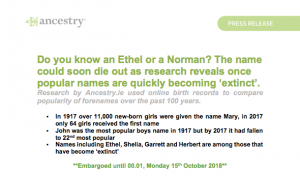 When sending out their extinct names press release, the team thought long and hard about timing. They decided on Sunday for Monday.

The beginning of the week is the quietest time for the media as journalists are looking for stories. Sending your release early on in the week, or even on the weekend, will give you a greater chance of success.

The team sent their release at 11am on Sunday, the time were most journalists come in to get ready for the Monday paper. The release was embargoed until Monday at 00.01. This allowed print journalists time to get it into the paper before it was seen online.

The tactic worked. In total the story appeared in 14 newspapers, 25 online publications and was spoken about on 37 separate pieces of radio.

Here at All Good Tales we are doing great work for brands like Failte Ireland and DAA, to name just a few. We are building brand newsrooms, executing exciting PR strategies, and training key staff how to source, structure and tell great stories. For a free consultation, please click here or call Gaye on (01) 254 1845.