As part of our Brand Story Hero series, we shine a spotlight on storytelling around a brand we admire. Today we’re looking at international online accommodation platform, Airbnb.

Mission:  To provide travellers with authentic experiences and to foster a sense of belonging anywhere in a community of like-minded individuals.

Airbnb started with a couple of broke students and an air mattress. When they were in college Brian Chesky, Joe Gebbia and Nathan Blecharczyk rented a mattress on their floor to strangers to help them pay the bills. From there Airbnb has gone onto be valued at $30 billion. That’s a pretty good story, to begin with, it’s the dream of every startup founder. However, after five years in business, Airbnb realised that this story didn’t really represent their brand anymore.

In late 2013 Airbnb’s co-founders–with the help of Douglas Atkin, their new community officer–decided to search for their story. Airbnb had previously marketed themselves as a service that provided homes for travellers rather than just accommodation. They created a series of videos centring around birdhouses entitle ‘Birdbnb’. This campaign didn’t fully convey the sense of community that had emerged from the platform. The people who were using Airbnb by this time were extremely passionate about it and vocal about that passion. Airbnb knew that that was where they would find their story, inside the community they had created. The team at Airbnb conducted interviews with close to 500 people all over the world who used the platform as hosts and as holidaymakers. There was one word that kept coming up during these conversations: belonging. 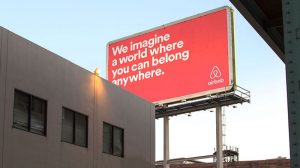 The simple idea of ‘belonging’ became the centre of the Airbnb brand story. The company now had a mission, to create a world where people can ‘belong anywhere’. ‘Belong Anywhere’ became the official tagline of Airbnb and led to the creation of their new logo and their entire brand story.

They wanted to create a symbol that could be easily replicated and that was instantly recognisable. They also wanted this new logo to become immediately synonymous with what the company stood for and what it meant to be part of the Airbnb community. This led to the creation of the ‘Bélo’ (pronounced bay low). This symbol was designed to represent the people, places and love present in the Airbnb community and the company itself. In 2014 Airbnb debuted their new mission statement to the world and launched the redesigned Airbnb site and app and of course the Bélo. They shared their vision for a world where anyone can belong anywhere and from there the new Airbnb story could begin.

Since the creation of the Bélo, Airbnb has continued to embrace the message of belonging. As a brand, they have championed messages of acceptance, equality and belonging. Their “Until We All Belong” video series in 2017 focused on the debate around marriage equality in Australia. Airbnb also offered free accommodation to people who were stranded on the back of President Trump’s executive order in January 2017. This was not a first for Airbnb. They previously encouraged hosts on the site to list their homes for free to victims of natural disasters.

Lesson #1–Keep People At Your Centre

When Airbnb set out to interview their users they realised something very important. No one was going to be able to tell them more about Airbnb than the community of people who use it every day. People are the heart of the company and Airbnb recognise this. The interviews and conversations with their users are what shaped the entirety of the Airbnb story and brand as we know it now. Keeping your customers at your core and learning from their experiences with your business could prove invaluable in finding your own brand story.

Lesson #2–It’s Not Too Late to Find Your Story

Airbnb started in 2008 but it wasn’t until almost 2014 that the company realised it needed to find the mission of the business in order for them to continue to grow and progress. They set out to look for the story they wanted to tell about their company they created an instantly recognisable global brand in the process. Airbnb proves that it is never too late for brands and businesses to find the story they want to tell.

Airbnb has a passion for high quality, visually stunning content. They post consistently on YouTube as well as their own blog. Their content is heavily user-driven and centres on stories from within the Airbnb community. High quality, consistently posted content allows people to engage with your brand. It is important to create the sort of content that people will want to read and watch, aesthetics play a huge part in this and Airbnb have capitalised on that. Their content has gone beyond what is expected of companies nowadays: They published a magazine. Airbnbmag is a quarterly publication that aims to be a feature of the coffee tables of hosts around the world. The magazine is a combination of stories from the hosts, articles highlighting the beauty of more obscure destinations and beautiful images from locations around the world.

Since its creation, the Airbnb Bélo has grown into one of the most immediately recognisable symbols in the world. This was what Airbnb hoped for from the beginning. The new logo needed to be easy to replicate and have the ability to encapsulate the different elements of Airbnb. The Bélo tells the story of the company in one symbol.  The Bélo reminds people of the company’s central ideas of travel, belonging and adventure. The palette of colours they use on their site, app, social media and advertisements are key to their branding strategy. The power of Airbnb’s branding is that they have created it and managed it in such a way that it has become synonymous with all the different experiences associated with an Airbnb getaway. 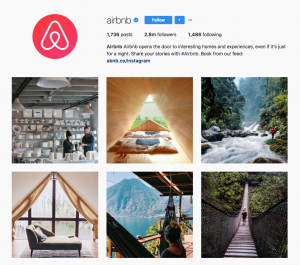 Airbnb uses their huge community of host and guests to further their brand story. When you have a user base as passionate as those who use Airbnb why not?

Airbnb initially created separate pages to host users stories and experiences. Although the use of these has fizzled out as the Airbnb community page becomes more widely used Airbnb still have an incredible amount of user-generated content to utilise on their social media channels. Airbnb often requests permission to use pictures and videos taken by their users on their own social media channels. They are lucky in this as they offer a service that lends itself to pictures. It’s fair to say very few people go on holidays without a camera.

Airbnb Open was originally marketed as Airbnb’s global host event. It was a chance for the company to celebrate the hosts as the central part of their business. However, the Open is first and foremost a chance for Airbnb to tell their story and launch new ideas. This was exemplified at the 2016 event when Airbnb launched Trips. 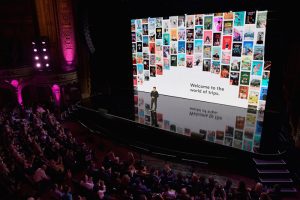 Airbnb Trips allowed the company to move away from simply being a cheap alternative source of accommodation to specialising in giving travellers once in a lifetime experiences. The app and website now offers not only accommodation but curated tours and experiences which are run by Airbnb hosts. When he presented this idea at Airbnb Open 2016, co-founder Brian Chesky used personal photos from his childhood to explain the idea of what we look for when we travel. Airbnb Open allows the company to engage with their audience both at the conference and beyond at a more human level. It removes some of the facelessness that often plagues tech companies and makes the company and its founders accessible.

The content that the company produces at these events is nicely edited and extremely shareable. In more recent times Airbnb have launched more new features, such as Airbnb Concerts, via Open. It is an important tool for the company to tell their story with.