Today, we are back with another instalment of our Brand Story Hero series. Here, we put brands that tell their story exceptionally well in the limelight and this week, it’s The Body Shop‘s turn to be the centre of attention. The company was the first in the beauty industry to make fair trade their priority and with that, completely revolutionised the whole sector.

While training to be a teacher, Anita Roddick was offered a scholarship in Israel and she happily accepted. It made her realise that the support received within communities is unparalleled by the aid any government or other institution can provide.

A little later, Anita decided to travel Europe, the South Pacific and Africa. During these travels, she became acquainted with rituals and customs as practised in many Third World countries and many of them had to do with health and body care.

Once Anita returned to England, she met Gordon, a kindred bohemian spirit; they quickly got married and opened a hotel and café together. Gordon’s life-long dream was to ride a horse from Buenos Aires to New York and to help him fulfil that dream, Anita agreed to sell their business to finance his trip. 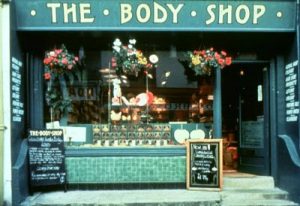 The first Body Shop in Brighton

Because she needed to sustain herself and her daughters in the meantime, she decided to open a small shop selling cosmetics. The rituals and customs she had encountered whilst travelling fascinated her, so she chose to incorporate them into her back-to-nature products. As Anita was on a shoestring budget, concessions to aesthetics were impossible. She offered customers discounts if they brought back their empty containers to have them refilled. Anita also encouraged minimal packaging, as well as all forms of recycling and reusing. In that way, she could keep production costs low and the customers loved the sustainable approach. She also felt very strongly about animal testing and saw herself as an animal advocate. The Body Shop, therefore, positioned itself against animal testing from the very beginning. 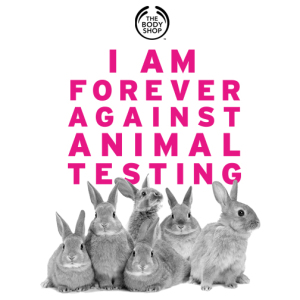 Within one year, the business had grown so big, she opened a second shop and soon after that started selling franchises. Another milestone in the company’s history was taking it public in 1984 and just a year later, the shares had doubled in value.

To Anita, a passionate human and animal rights activist, promoting social causes always took priority over growing The Body Shop, so she didn’t think to revamp the ageing product line. Consequently, better-run imitators started eating into Anita’s customer base. In 1995, a scandal hit the media: The Body Shop’s products contained cheap, petrochemical ingredients, because their quality control was sloppy. The Body Shop allegedly donated 25% of its revenue to charities, but those claims were also revealed to be untrue. The accusations of hypocritical practice generated a wave of negative press. Sales fell and profits dulled.

In 1996, it could no longer be denied that change was inevitable, so Anita stepped back and installed a managing director. He tightened the reins and restructured the company. Anita was ambivalent about the new course of action, because she felt it squashed the entrepreneurial spirit. In the end, the new direction didn’t have the desired effect and sales continued to decline. In 2006, Anita made a very controversial move when she sold The Body Shop to L’Oréal, a company that is widely known to test on animals.

After Anita died in 2007, the company was appointed a new CEO and given a new brand look, but that couldn’t prevent the sales from sinking further and the operating profit from diving.

Because the partnership with L’Oréal was not ideal for both parties, The Body Shop was sold to the Brazilian cosmetics company Natura in 2017. The new parent company shares many values with The Body Shop, such as the human activist spirit and purpose-led philosophy. The new alliance is extremely close to The Body Shop’s DNA, so many hope the company will soon be restored to its former glory. In the end, however, only time will tell.

When Anita founded The Body Shop, fair trade in the cosmetics industry was not common practice. Because her values were of such importance to Anita, she nevertheless decided to pioneer her business concept, even if that was bound to be more difficult than following already trodden paths. Shying away from the challenge may be the safer option, but it also means never achieving anything groundbreaking.

#2 Admitting to a mistake is okay.

During an interview, Anita once admitted that the biggest mistake she’d made had been to take The Body Shop public. She said that in retrospect she would have preferred remaining a small giant over just being a big business. Everybody makes mistakes, it is impossible not to. Many companies would still rather have customers believe that they are exempt from committing errors than owning up to a mistake made. Anita on the other hand freely admitted to having made a wrong decision and with that has made her company approachable and relatable.

#3 Stay true to your roots.

In 2006, Anita Roddick sold The Body Shop to L’Oréal and was hit with a wave of negative press in response. When asked why she had decided to sell to that particular company which is known to test on animals, she said that she intended to serve as a Trojan horse. She wanted to positively influence L’Oréal’s decision-making process. Anita believed that this objective would be easier achieved from within the company. In that way, she could remain true to The Body Shop’s values.

In 2017, The Body Shop was sold to Natura and with that alliance reinforced its origins. Now, ethical production is back at the forefront of the company.

For a long time, The Body Shop didn’t do any marketing or PR work in the traditional sense. A few well-placed interviews and Anita’s activist campaigns were enough to promote the company. Because Anita’s values were also at the core of The Body Shop, her actions indirectly promoted her business. For PR she relied exclusively on storytelling and trying to get their message across to the media for quite a while.

Even today a big part of The Body Shop’s marketing and PR is closely linked with their social causes. In 2017, they launched the campaign Forever Against Animal Testing with the aim of gathering 8 million signatures by 31st August 2018. The petition is then to be presented to the United Nations with the ultimate goal being a ban on animal testing in the cosmetics industry globally.

Over 30 years ago, The Body Shop set up its first Community Trade programme. Because sourcing quality ingredients and accessories from expert producers is very important to The Body Shop, they decided to start doing business with local communities. By procuring the wares from them directly, The Body Shop helps enrich and support the economically vulnerable. Today, they have 26 community trade suppliers in over 20 countries and 25,000 people benefit from it. By 2020, The Body Shop is hoping to support 40 communities all over the world with its programmes. 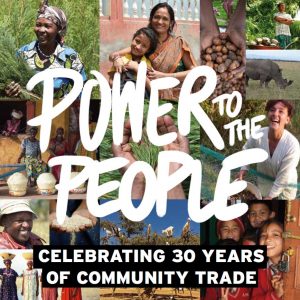 Every business that is still in its infancy is on a tight budget. The Body Shop made a virtue of necessity by reusing, refilling and recycling. When Anita started off, she tried to keep costs as low as possible, so she offered customers discounts if they reused and refilled the empty containers. She also tried to use as little packaging as possible, again to save money.

Customers, on the other hand, appreciated the environmental friendliness of her company and identified with The Body Shop in consequence.

Here at All Good Tales, we believe every brand has a story to tell. Don’t know how to tell yours yet? We’d love to help you out with a free consultation session. Call Gaye on (01) 254 1845 to set yours up today. We also run storytelling courses that give you practical information on how to take your storytelling skills to the next level. For more information or to secure your spot, click here.