In our Brand Story Hero series, we shine a regular spotlight on different brands we think tell their story well. Here we take a look at Field Notes, a cult stationary brand. 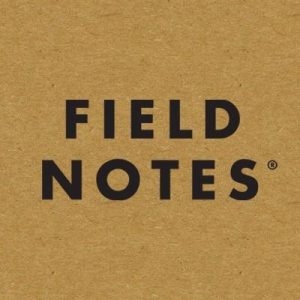 Field Notes notebooks come with ruled, graph or plain pages in their signature “kraft” brown colour, but the brand has become known for their smaller runs of limited edition notebooks, which are released quarterly and available individually or as part of their yearlong subscription service.

Sold online and across hundreds of retail locations in the US, the brand has also partnered with various companies including Levi’s, Starbucks, Nixon, Loot Crate and J. Crew to sell exclusive release products.

It all started in 2006/2007 when Field Notes co-founder Aaron Draplin made about 200 notebooks. He made them on a Gocco press, a little Japanese toy press, cut the corners round and they looked pretty similar to what they look like today.  He sent them to some of his friends, one of whom was Jim Coudal of Coudal Partners. 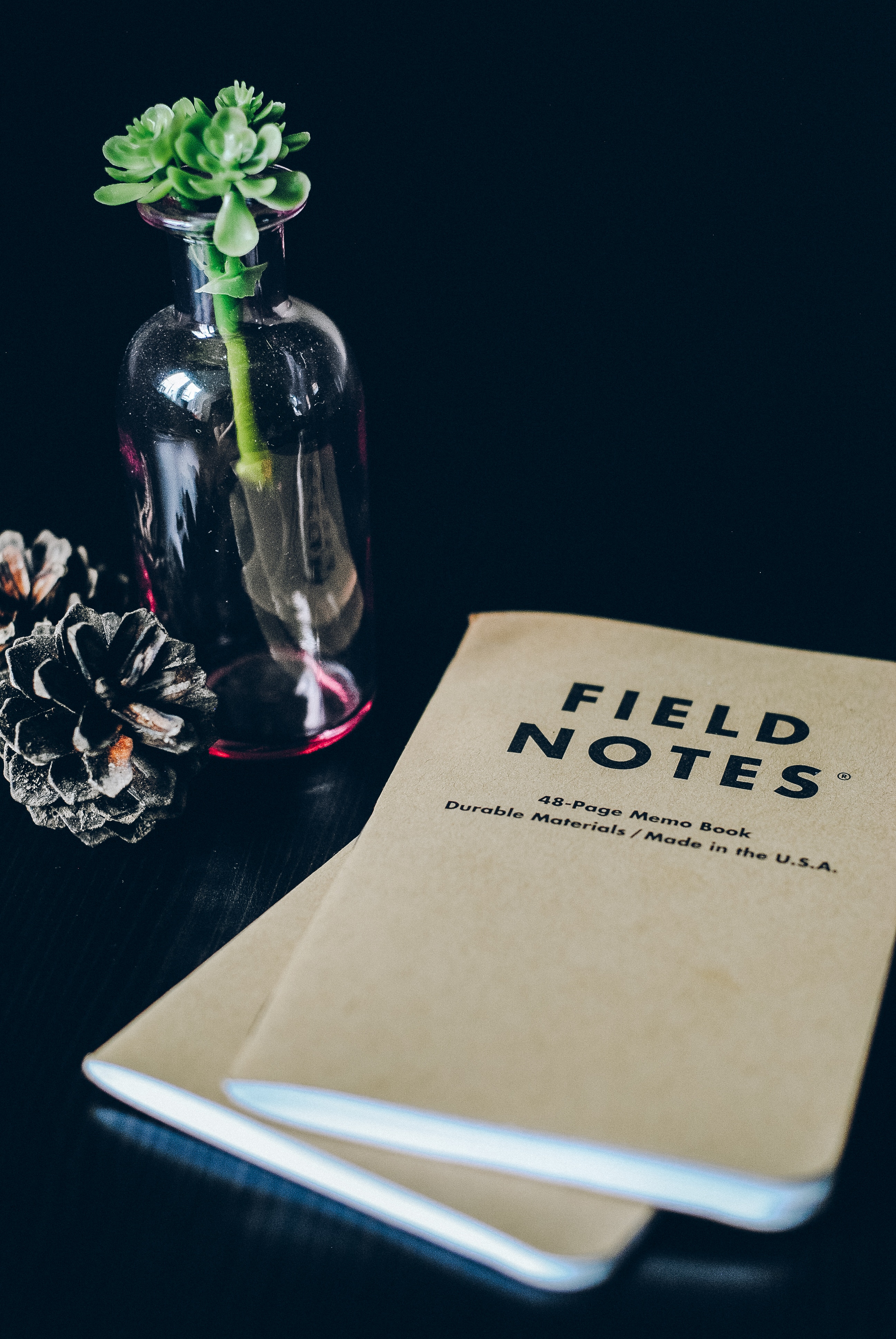 Jim thought they could make a company of this idea. They registered the domain, made 5,000 three-packs of them, and got the site up and running within a couple of months. The first day they made 13 sales. That was through blogging it on Fresh Signals (Coudal Partner’s creative agency blog) and Aaron putting in on the Draplin Design Corporation (DDC) site.

When they released their 15th seasonal limited edition, they decided to get back to their roots. Field Notes owe their existence to a tradition of promotional memo books distributed to American farmers over the last hundred years by seed, tractor and other agricultural companies.

Draplin has been collecting these for years, “rescuing them” from obscurity. In 1993, Aaron travelled from the mid-west west. On his journey, he went to junk sales, flea markets and estate sales. He found these pamphlets and used them to draw and take notes. As his collection grew he started digging into the design, history and who actually made these pamphlets.

He has built a web-archive of his collection so that they do not fade into forgotten history. To him, they mean regular people working really hard.

Every Field Notes notebook lists out its specifications in its one typeface, Futura. Field Notes draws design influences from the European utopianism of the Bauhaus, the agricultural and industrial confidence of the postwar Midwest and embraces the regional legacy by rural-kids-turned-designers like Draplin. Draplin grew up in Michigan, the son of a tool salesman. 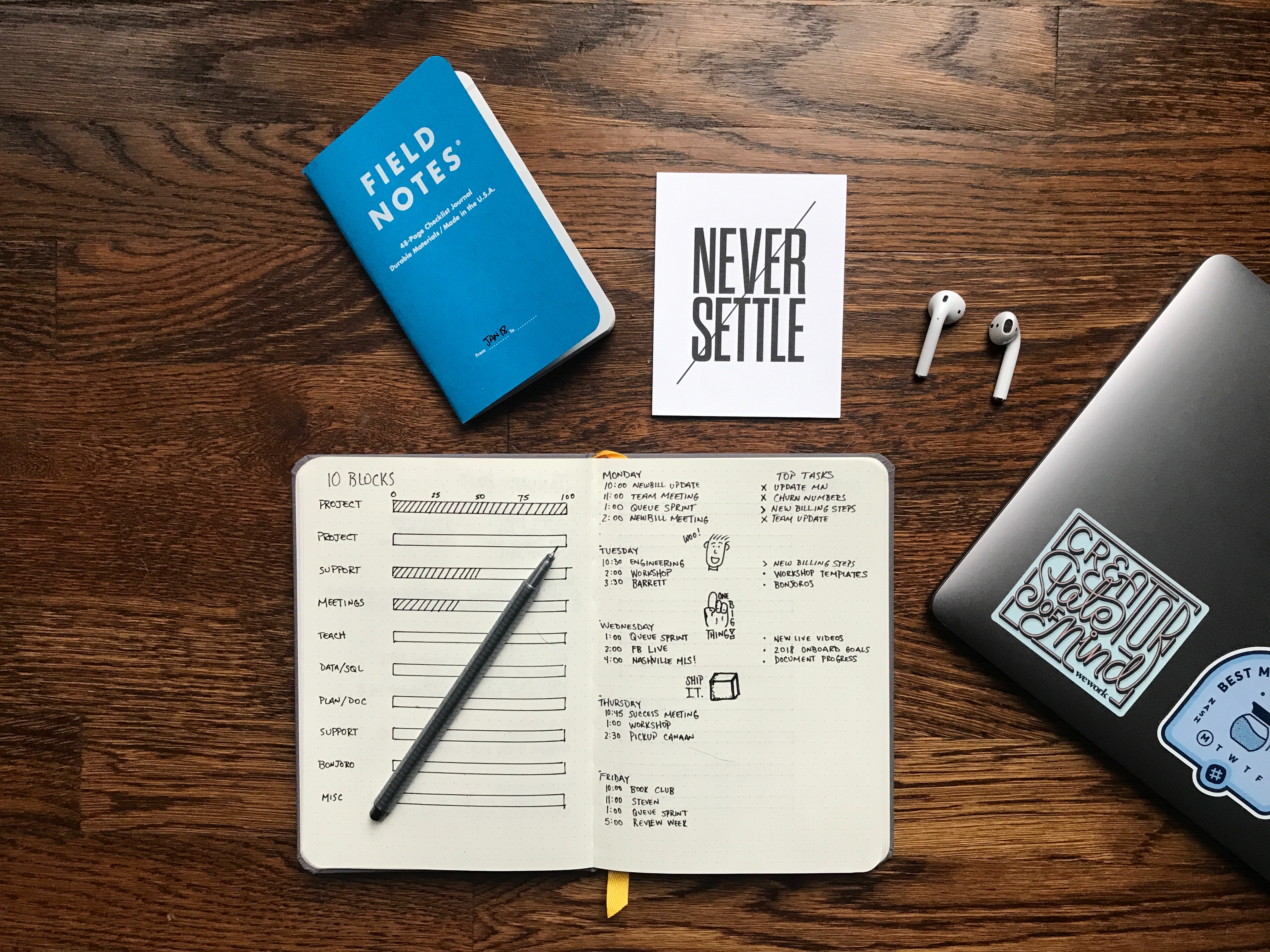 Field Notes’ big break came from J. Crew. In 2008, not long after Field Notes launched, the clothing company turned an old bar into a menswear store. J. Crew curated a handful of brands with history and heritage to stock alongside their own clothing in the Liquor Store and chose to stock Field Notes. The brand, of course, didn’t have much of a history or heritage behind it—but its design did, so it slotted well next to Red Wing boots and the like.

Field Notes is paper with personality. The vintage-inspired notebooks evoke nostalgia for an America before keyboards.

The days of elegant hand-written letters and dear diary entries may seem long gone but a nostalgia for script still lingers. The Chicago-based Field Notes brand is proving that with their line of American-made notebooks.

Though the notebooks are sold worldwide, Field Notes has that local feel only a truly American-made product can. Inspired by a tradition dripping in red, white and blue, Field Notes sources everything from the staples to the packaging in the US.

Field Notes has become coveted by collectors, co-founder Jim Coudal explaines that as American-made fashion and back-to-basics hipsters came into vogue, Field Notes found its way into the mainstream.

That the brand does seasonal editions—special notebooks with a smaller run of about 30,000 created around a theme and using an unexpected production process—has also curried favour with fans. Tens of thousands of customers subscribe to the seasonal editions. Essentially a pre-order system, it has given the brand a reason to reach out to customers four times a year and helped it expand quickly.

Lesson #1 A strong founding story is hard to beat

The founding story of Field Notes is a quirky, engaging, all American story. It proves that an authentic story connects with customers.

In the Midwest, a designer couldn’t find a sketchpad he liked. He visited flea markets and junk sales collecting promotional memo books distributed to American farmers over the last hundred years by seed, tractor and other agricultural companies.

He began making his own notebooks following the style of these agricultural memo books.

When telling your story, simplicity is key. If it’s too complicated, people will get lost along the way. Below is a video that explains the story of where the idea of Field Notes comes from.

This tag line has more than just a nice story of it being co-founder Jim Coudal’s grandfather’s favourite saying. It’s based on science. The physical act of writing something down ingrains it in your mind much better than typing it or flipping into an app.

Lesson #3: Stick with your values

With high quality stationary being available on every corner for peanuts why should people buy your product? What sets apart from the others who are flooding the market with their products.

Because Field Notes has a strong set of values, which includes being manufactured and produced in the US and using recycled paper, they are setting themselves apart from products which focus on mass production.

#1 Making the notebook the champion

The agricultural memo book is central to the Field Notes products. So much so, that Aaron has started to digitize his collection so that they can sit pride of place on the Field Notes website.

This is so that they will not be forgotten and fade away into obscurity. The form a big part of the history of the brand and acts as a reminder to stay true to their vision and their story.

You can subscribe to these seasonal editions—essentially a pre-order system—which gives Field Notes a reason to reach out to customers four times a year.

This has helped the business to grow quickly and build its cult following.

Field Notes have their own house style which they stick to implicitly. They come in packs of three exclusively, have ruled, graph or plain pages in their signature “kraft” brown colour. Field Notes uses only the Futura typeface family.

Everything from the staples to the packaging is sourced in the US giving it a local feeling even when sold internationally.

Here at All Good Tales, we believe that every brand has a story worth telling. Not yet sure how to tell yours? We’d love to help you out with a free consultation. You can call Gaye on (01) 254 1845 to organise yours today. We also run courses that give you practical information on connecting with customers. For more information or to book your place, click here.