In our Brand Story Hero series, we shine a regular spotlight on different brands that we think tell their story well. Here we take a look at Patagonia, the sustainable clothing company.

cause no unnecessary harm,

use business to inspire and

implement solutions to the

In the early 1970’s Yvon Chouinard accidently stumbled across an idea that would revolutionise the clothing industry. A holiday from California, USA to Scotland would lead to Yvon building a clothing empire. This is the story of Patagonia.

In order to understand how Patagonia came into being you need to go back a few years.

Growing up Yvon Chouinard was notoriously hopeless at whatever he turned his hand to. In 1953 a 14-year-old Yvon began climbing. The sport wasn’t as well-known in America at the time. Yvon saw an opportunity to excel, and he took it. He joined a local Falconry club in Southern California and his love for the pastime grew. The excitement and intensity of rappelling down the sides of sheer cliffs meant that Yvon was instantly hooked.

Soon, Yvon and his friends began going out on excursions on their own, travelling around America to rappel down rocks. On their travels they would hop from freight train to freight train travelling from the west end of the San Fernando Valley to the sandstone cliffs of Stoney Point.

As he got older Yvon became more involved, climbing became his way of life. Environmentally conscious, Yvon noticed the damage his climbing equipment was having on the rock faces. To try and prevent further damage he began making his own equipment. This effort to look after the environment would become a driving force behind the ethos of the business.

This passion soon turned into a business. He began selling his pitons (metal spikes) for $1.50 each. Yvon began supporting himself through the sale of his equipment. He began travelling around the country, climbing by day and forging by night.

It wasn’t just Americas west coast where Yvon enjoyed climbing, he also took trips to mountain ranges around the world. In 1970 on a winter climbing trip in Scotland he bought a rugby shirt to wear while climbing. This was a far cry from his traditional uniform made up of cut-off chinos and white dress shirts usually bought from a thrift store. 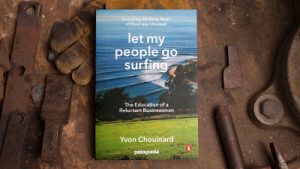 This impulse purchase would change his life. Built to withstand the brute force of a rugby match the top withstood the climb. The collar prevented hardware slings from cutting into Yvon’s neck. He knew he was on to something.

Back home Yvon continued to wear rugby jerseys while climbing. It caught on and before he knew it he had started a new fashion trend, a brightly decorated rugby jersey with a good collar was in high demand.

To keep up with growing demand Yvon ordered jerseys from Umbro in England. They sold out. He then began ordering from New Zealand and Argentina. They sold out too. The Chouinard team saw clothing as a way to support their equipment business. By 1972 they had expanded further. They were now selling rain cagoules and bivouac sacks from Scotland, boiled-wool gloves and mittens from Austria and hand-knit reversible “schizo” hats from Boulder. 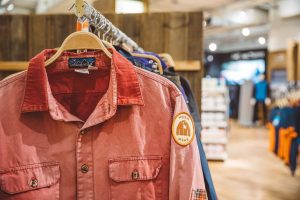 As the clothing side to their company grew they decided it needed its own unique name. In 1973 Patagonia was born. A name they described as one that brings to mind “romantic visions of glaciers tumbling into fjords, jagged windswept peaks, gauchos and condors”.

Since their inception Patagonia have spent decades perfecting their product. They have researched different materials, colours, working environments and environmental ethics to create their products. These are products they are proud of and ones that will promote a safer environment.

Today Patagonia is one of the worlds leading environmentally friendly clothing brands. The company reaches far beyond clothing and is committed to teaching and training the next generation of environmental activists. Patagonia are doing this to continue their mission of finding a solution to the ongoing environmental crisis.

Patagonia’s mission statement is simple. One short sentence comprehensively tells us who they are, what they are about and what they want to achieve.

Patagonia is passionate about what they believe in and it is clear to see. Their mission statement is not put together to make their company look good. Instead it is a statement of intent. It is designed to act as a constant reminder of the good they are doing and continually trying to do.

Lesson #2 Build a network of brand ambassadors and use them.

Patagonia have a group of over 90 dedicated brand ambassadors. These ambassadors aren’t famous climbers or snowboarders. They are users of Patagonia clothing in various outdoor activities and are enthusiasts in their chosen fields.

They produce content for their blog and social media accounts based on their activities and what they are currently up to. This content is broken up into the ambassadors respective area. Patagonia have focused on their target audience and are using their brand ambassadors as a means of audience engagement.

This enables Patagonia to produce insightful and engaging content from around the world. As they have a large group of ambassadors Patagonia’s blog The Cleanest Line is constantly updated. No two blog posts are the same as each individual’s experience is different. It also allows them to share beautiful imagery on both their blog and social media. These images are captured by their ambassadors as they embark on their own adventures.

Lesson #3 Engage with your audience

With many companies once you have bought their product your interaction with them is over. This is not the case with Patagonia.

Engaging with the audience is something Patagonia is constantly doing. This is achieved through their recycling clothing initiatives, their email newsletter, their feedback forms or their public engagement outreach initiatives.

This demonstrates that Patagonia is enthusiastic about engaging with all those who visit their site and constantly want feedback on how to improve. It also shows they are passionate about what they believe in and are keen to spread the word. It shows they are a company who keeps people at the heart of what they do. This makes customers feel included in the process and therefore makes them more engaged with the brand.

Patagonia’s interaction with their customers does not end once their clothes have been purchased. Patagonia has introduced a new initiative called Worn Wear.

This initiative allows Patagonia users to buy used clothing, repair their own damaged clothing or trade in clothing and receive credit to put toward a new or used garment.

This initiative is another embodiment of Patagonia’s mission statement. It demonstrates their commitment to their cause.

2) Stories that travel the country—Patagonia truck

As part of the Worn Wear campaign Patagonia constructed a purpose-built truck to travel around America and repair clothes on the move. The converted biodiesel truck was kitted out with industrial sewing machines with two of Patagonia’s seamstresses on board for the journey. 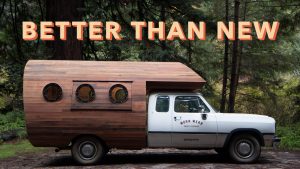 This truck was built with environmentally friendly and reusable material and is a unique embodiment of what Patagonia stands for. The truck also acts as a storyteller, capable of being the focal point of many stories as it travels cross-country. It provides Patagonia with something unique, something that can tell the story of Patagonia by just looking at it.

3) Immersing your audience into your culture

One of the many things Patagonia does well is it’s video content. Whether they are long or short Patagonia routinely uploads visually impressive and thought-provoking videos on a range of different topics.

These videos allow audiences to see Patagonia products up close, they allow them join brand ambassadors on their adventures around the world and they provide a sneak peek into the lives of those who are behind the clothes.

Patagonia also uses video to promote their environmental message and use it as an opportunity to explain why they get involved with certain issues and what they are doing to support a response to ongoing environmental issues.

Patagonia are more than just a clothing brand and recognise that detailed, interesting and thought-provoking videos is a way they can communicate their message to a wider audience.

Patagonia is present on all mainstream social media sites and regularly update their various outlets. 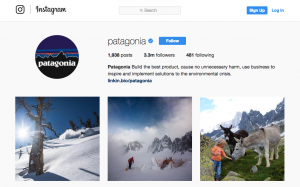 Patagonia’s updates on their social media outlets are mainly visual and often show activities listed in Patagonia’s blog content and covered by their brand ambassadors. The content is not about Patagonia’s clothing or a sales pitch but instead they are photos and short videos of beautiful landscapes in which their ambassadors are skiing, snowboarding or rock climbing.

The content is engaging and cleverly shows off the brands clothing without being overly pushy. Patagonia have gathered a large following on their social media with over 1 million ‘likes’ on Facebook and nearly 400,000 followers on Twitter.

5) Impart your wisdom on those who want to listen

Patagonia reaches out to those who believe in their cause.

Since 1994, every two years Patagonia have held “Tools Conferences”. They gather thought leaders and experts from both nonprofit and for-profit organisations to share their expertise with advocates from grassroots environmental groups that Patagonia have connected with through their grants program. These conferences have successfully trained an entire generation of activists. 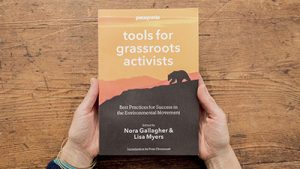 In 2016 Patagonia released ‘Tools For Grassroots Activists: Best Practices for Success in the Environmental Movement.’ This takes advice and knowledge from everything Patagonia has learned over the years, specifically at their tools conferences, and packaged it into a neat book about how to succeed in building successful grassroots environmental campaigns.

Patagonia also outreaches to those who are not customers. They have a dedicated page on their website where people can request a representative from Patagonia to speak at an event. This is part of Patagonia’s mission and shows how passionate they are about what they believe in. They want to get their message out and share their ideas and experiences with the broader community.

With these initiatives Patagonia wants to inspire their audience and enable them to create ideas as to how they can be more effective in solving the environmental crisis. Patagonia demonstrate their passion for the cause by building a community of people who can take action.

Here at All Good Tales we are doing great work for brands like Kingspan, Glandore, Ancestry.com, and daa, to name just a few. We are building brand newsrooms, executing exciting PR strategies, and training key staff how to source, structure and tell great stories. For more information please click here or call Gaye on (01) 254 1845.