Have you ever wished you could just fix something you already have instead of having to buy something new? Jane Ní Dhulchaointigh thought just that.

Originally from County Kilkenny in Ireland Jane moved to London to study product design at the Royal College of Art.

In February 2003 while working on a college project she decided she no longer wanted to design new products. Instead what if she could fix and improve stuff she already had? Surely this would be better. A way to reduce waste by fixing the unfixable.

Jane began to experiment. Mixing sawdust with silicon sealants, Jane herself admits the first few prototypes were pretty awful. After a long and winding road, nearly two years on from this original idea, Sugru began to take shape. A customer described love child between super glue and Play-Doh that allows you to stick anything to anything.

In the summer of 2005 Jane won her first funding, a small business grant. After paying a lab to do some experiments Jane realised the only way Sugru would be successful was if she did it herself. Jane set a small laboratory and started to learn the basics, this began another two-year process to perfecting Sugru.

While working away on perfecting their stickable mouldable glue Jane and her business partner Roger received their first investment funding. They also became aware that small companies do not become household names overnight. They began to speak to some of the world’s leading glue companies in an effort to make friends.

It wasn’t until May 2008; over 5 years since it had first became an idea, that Sugru got its name. Jane recalls the story of how Sugru came to her. One summer’s day she was out riding her bike, she reached a hill and as she made her descent it came to her. Sugru. Inspired by the Irish word for ‘play’, súgradh, she instantly loved it.

The recession hit Sugru hard. Their funding was running low and no investors were biting. They would have to wait until the summer of 2009 when a private investor eventually gave them enough money to launch Sugru independently. Without big financial backing or a shop to stock their product in, it would be up to Jane, her business partner Roger, her partner James and the small team around them to make Sugru succeed. Jane recalls thinking it was now or never. 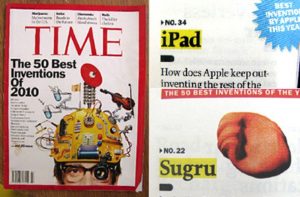 Jane and her small team worked day and night to make Sugru happen. They bought a mixing machine, engineered a packaging machine, designed and produced branding, made a website, and got out and told people about Sugru. Their efforts paid off. On 1st December 2009, their world changed.

A journalist on one of the UK’s most popular new websites raved about Sugru. Their first 100 packs sold out in 6 hours. By the end of 2010, they had their pick of investors. They built a factory and expanded their team. In November Time Magazine listed Sugru as one of the years top 50 inventions in 2010, 12 places above the iPad!

Jane admits she is a somewhat accidental entrepreneur. An idea she had at college has now grown into a successful brand used in 175 countries around the world. Despite her success, Jane and Sugru’s dream remains the same, for Sugru Mouldable Glues to be the go-to fixing solution for this century. And as they put it, they’re only just getting started.

Smile and the world smiles with you. That’s what they say. But be passionate about your business and it’s difficult for others not to jump onboard.

Jane is passionate about her brand, and it shows. Her passion has caught on and people around the world are now passionate about Sugru. The Sugru team encourages this, prompting their users to tell their own Sugru story. It shows through their blog on their website which documents how people are using Sugru in innovative ways to enhance their lives.

Their business grows because people love Sugru just as much as Jane does.

When you consistently evolve and improve your brand it grows

Once the stickable mouldable glue formula was perfected and the business was growing it would have been easy to sit back and enjoy the success.

Jane and her team didn’t do this. They knew Sugru could be bigger and better. They continued to work on the formula creating family-friendly versions and improving their packaging.

By constantly improving and building on their brand Jane and the Sugru team have seen their success continue to grow. Their new products invite new customers and promote their brand further afield. 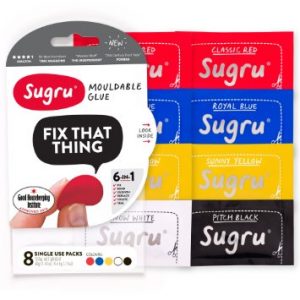 Build a community to promote your brand.

In September 2016 Sugru founder Jane announced that the Sugru community had reached an incredible milestone. They had fixed 10 million things.

Sugru has managed to build a strong and loyal community. A community that uses their product and is passionate about it. The Sugru team encourages this. They continually ask members of their community to share their Sugru story, how they have used the product and what hacks they have found.

By building this community Sugru is constantly being promoted. Users trust the brand because they see regular users using it and promoting it. It shows the versatility of the product and proves that it is workable and usable.

The success of Sugru proves that positive user reviews are the best advertising for your product.

1) An inviting and engaging founding story.

Jane’s story of how she founded Sugru is unique. The detail she gives her audience about the highs and lows of building her brand would engage any audience. The audience buys into the brand so when they buy some Sugru they know the story behind it and they’re willing it to do well.

Sugru use their blog to engage with their community and to tell the world more about they can use Sugru. Their blog is full of tips and tricks from their community on how they used Sugru to enhance their lives, from fixing the joy stick on a patients wheelchair to making your own DIY book holder, they’re all there.

It shows that Sugru is not for just one purpose. Instead, its uses are endless. There is always a new way to use Sugru and if you’ve found it you’re encouraged to let Sugru know.

Over the years Sugru has built a community of fixers who are as passionate about the brand as they are.

Through their blog, their social media and their website they encourage users to share their Sugru story. Documenting how they have used Sugru to improve their lives.

This builds the Sugru community and creates a constant flow of ideas. 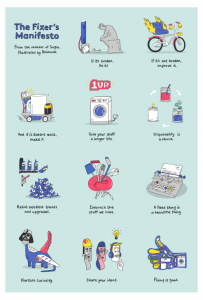 The Fixer’s Manifesto is a compilation of ten broad points listing how Sugru can and should be used. Sugru made this to help fuel the conversation about why fixing is so important.

This manifesto isn’t your usual manifesto. Visitors to the Sugru website have options of what type of manifesto they can download. One with just text, an animated version, or a “create your own version” which allows you to add your own drawings to the text.

Sugru are again getting their message out there. Their manifesto full of quirky animation engages with their users and encourages them to put their own stamp on Sugru’s message. It promotes the message of their mission statement, to get a new generation fixing things.

When you open the Sugru blog or YouTube homepage you’re instantly hit with the notion “what a good idea” or “why didn’t I think of that?” Even typing Sugru into YouTube will bring up an array of videos from Sugru users documenting their Sugru hacks.

When you think of Sugru you could be tricked into believing it has a few uses. Plugging a hole, fixing your broken charger wire or creating a hook to hang something off. But did you know it could be used to give a chicken a new foot? Or make unicorn bookends? I bet not.

Their DIY videos and blog posts detail how to make some innovative and thought-provoking Sugru hacks. They open up a whole new world of possibility and show that the uses of Sugru really are endless.