In our Brand Story Hero series, we shine a regular spotlight on different brands that we think tell their story well. Here we take a look at innocent Drinks, a food and beverage company.

If you could like help telling your brand story, organisation a consultation with us here.

In 1998, three college friends decided to undertake a social experiment, placing their future careers in the hands of the public.

Richard Reed, Adam Balon and Jon Wright brought £500 worth of fruit to a music festival in London.

They set up a stall and sold the fruit as smoothies while asking their customers to take part in a vote. Instead of offering a three-page corporate questionnaire, they decided to just ask the one very simple question. “Should we give up our day jobs to make smoothies?” Customers had to choose one option. Dump their empty smoothie cup into a bin marked ‘yes’, or a bin marked ‘no’. By the end of the day, their ‘yes’ bin was overflowing.

The next day the three men had quit their jobs. The company was set in motion.

After a 15 month struggle to get investors interested, the trio caught the eye of an American businessman, Maurice Pinto. Pinto invested £250,000 into the company.

The next step was to decide on a name, playing with Hungry Aphid, Nude and Naked, until they settled on innocent. 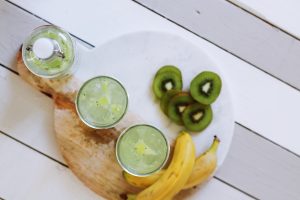 April 1999 saw innocent open for business as they began selling smoothies to a café across the road from their HQ. They launched with three smoothie recipes, with only one recipe surviving to this day.

Within a year innocent expanded to their first overseas office, based in Dublin (and by office, they actually set up in one of their employee’s sheds.)

They secured a trial listing in 10 British Waitrose stores. The innocent staff went and bought a load of their own products to make sure the sales went well. They did, and the innocent smoothies started selling across all Waitrose shops in the UK.

From the beginning, the company had philanthropy at the heart of their company. However, they did not realise how much they were actually donating to various charities. In 2003, innocent nearly led themselves to file for bankruptcy as the start-up was donating almost 46% of their profits.

As a result of this, the company then set up their own charity, ‘the innocent foundation’ that supports farming NGOs in developing countries. 10% of the company profits are now being donated.

2004 was also the year that ‘Supergran’ was born, now known as the ‘The Big Knit.’ This is where bottles of innocent smoothies are kitted out with their own individually knitted hats in aid of charity. They also further expanded internationally with offices opening in Paris and Amsterdam.

The company expanded into juices, then super juices and anything that involved blended fruit.

Between 2005 and 2008, the company made huge strides. They launched their first TV ad, their workforce grew to 100 people, they opened offices in Denmark, Austria and Germany. They also expanded into the food business as they launched veg pots to the market.

Along came the recession, and after years of steady success and multiple mistakes, the brand’s profits were down, and they had to start letting employees go.

In 2009, Coca-Cola became shareholders in innocent, buying an 18% stake in the company, furthering their hold in the company. Soon afterwards, in 2010, they bought out a further 38%.

With the investment from Coca-Cola, advertising grew and innocent spread further into Europe. 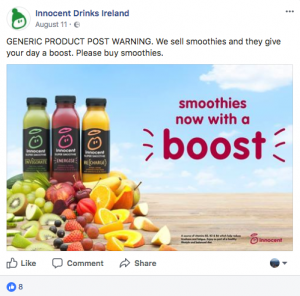 By 2014, Coca-Cola owned over 90% of shares in innocent, Coca-Coca completed its takeover in 2013 as part of a deal that reportedly valued Innocent at £320 million. The three former founders stepped down from their positions.

The company went from strength to strength with innocent becoming the number one chilled juice brand in Germany, Austria and Denmark.

Despite threats from the anti-sugar lobby over the sugar content in their products, innocent maintain that there is absolutely no added sugar, and that the sugar content contained is due to the high amount of naturally occurring sugars that is present in fruit.

From a very humble office of cardboard box desks, and a ceiling that wasn’t tall enough for them to stand up straight in, to selling the company and product to conglomerate Coca-Cola, Reed, Balon and Wright’s story is one of success. Their humble start-up grew into a global company that continues to execute their brand story well.

Find out how your brand can become a Brand Story Hero by requesting a consultation.

Lesson #1 Building a community around your story

The idea for innocent was founded at a festival when the founding trio sold their first smoothies. Taking inspiration from this, the company run an ‘innocent unplugged’ annually. The festival encourages disconnecting from technology and reconnecting with those around you. It encourages creativity and includes large-scale dance classes and healthy, fresh food. A taster of the festival can be seen below.

The company are very much community based. They frequently bring customers into HQ to test out new recipes, tour the towers, and give their feedback in a casual setting rather than a clinical corporate environment. Innocent encourage interactions with their community and are engaged and interactive both online and off.

Lesson #2 Show, and tell the story

Innocent make the most of images and video. From their online presence to their quirky packaging, innocent don’t just tell their story but they also show it. They use visual storytelling, and they do it well, leading to a sensory experience for the consumer/potential customer 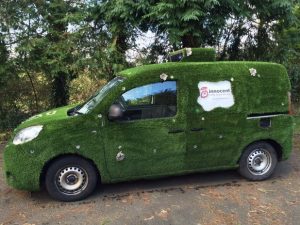 The use of colourful fruit makes the products look fresh and healthy.

The cinematography in their marketing YouTube videos features authentic and emotive content. It portrays normal people and their stories that relate to their customers’ own lives, rather than just a scripted corporate pitch about how great their product is.

In 2016, innocent launched their ‘hungry grass vans’. The vans went on tour promoting innocent’s recipe book “filling your family with good stuff.” Using the #grassyvantastic they encouraged customers to share photos of the vans across their social media platforms. This marketing van is a visual representation of their brand story.

Richard Reed, Adam Balon and Jon Wright knew they wanted to create a company together, but didn’t know how or what they were going to create. They threw around ideas regarding outlandish complicated tech products, but they knew deep down that while these may be convenient, they would not appeal to the masses.

Instead, they went back to basics and decided to target an something that was of importance to everyone on this earth. Health.

Fruit and vegetables don’t just hit a specific age group or target audience. The idea of fresh and healthy food appeals to everyone.

By taking this simple factor in consideration and adding their twist of fun, the innocent brand is now a worldwide success story.

Their story foundation is something that everyone has in common enabling them to build their brand story, and that brand story has led to their success today.

Their website features an ‘innocent timeline’ that displays the highs and lows of the story of the company, how it developed from a three man start-up to the multinational company it is today.

This timeline also features on the walls of innocent HQ, and includes everything from their very first business plan to the story of their packaging and everything in between.

Below is a video of Dan Germain the Group Head of Brand and Creative who gives a history tour of their London HQ.

Their brand ethos and story has remained true to how the company was started — with a lot of hard work while not taking themselves too seriously.

From day one, charity giving was a big part of the company’s story.

In their almost 20 years of business, the innocent foundation has committed nearly 4 million euro. This has directly helped over 750,000 people.

Ever pick up a drink from the fridges in the supermarket and see a bottle with a knitted hat on it and wonder what it’s about?

Here in Ireland, innocent run an annual ‘Big Knit’. People can find the knitting patterns online, then submit their small knitted hats for bottles of innocent smoothies. These are sold during the month of October, donating 30c to Age Action Ireland for every hat sold. They explain that “as many as 25,000 older people’s lives are at risk because of the cold. And we wanted to help.”

I'm mad about these lil hats on Innocent Smoothies! Such a fantastic marketing idea and for such an amazing cause too (@AgeAction). Kudos, @innocentIreland 👏🏻 pic.twitter.com/mqzaKS2YtX

Their Twitter account, in particular is an excellent tool for sharing their brand story. They have high levels of interaction (including sharing ‘jokes’ with their customers as seen below), witty graphics, and they make the most of hashtags, images and videos. They use their Twitter account as an extension of their brand story. The use of social media means that people tweeting their products spreads their message to a larger audience. This acts as a form of customer marketing.

Why didn’t the skeleton go to the dance?… He had no body to go with pic.twitter.com/PQEx1dyBzc

Due to a lack of financial resources, for the first five years the company depended on their physical products to carry out their PR and marketing.

They used doodles, fun facts and stories to fill the blank spaces on their bottles. This creates quirky and individual packaging that would look eye-catching on a shelf. This marketing tactic is still in use today, along with their logo being a distinctive feature across all their products.

The innocent website is almost over-whelming with how much information it has available to sift through. They have press snippets, previous advertising campaigns, a blog, books, and videos.

s a continuation of their brand story. It’s colourful, features real people and the content is highly amusing. Their blog contains tongue in cheek listicles, as well as featuring a ‘bored’ and then a ‘really bored’ section. This includes links to pieces such as ‘Dogs chewing stuff’ and ‘Annoying Fruit’. Although these are all external pieces, they engage the customer and associates the brand with humour and fun.