Our Story Studio houses bookshelves full of colourful and engaging graphic novels brought in by our CEO.

These books are regularly taken by the team to enjoy, spreading our love of a great story.

We’ve decided to spread this joy of storytelling further.

Every few weeks we’ll be focusing in on one of the graphics novels which line the shelves of our Story Studio, focusing on their story and sharing why we loved it. You can catch the latest instalment which looked at ‘Blankets’ by Craig Thompson here.

‘Andre the Giant: Life and Legend’ by Box Brown. 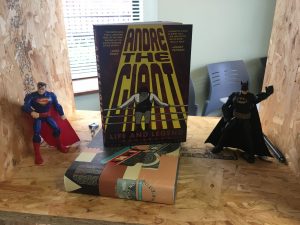 Taking anecdotes from his colleagues in the wrestling world, including Hulk Hogan, and his film co-stars like Billy Crystal and Robin Wright, Box Brown tells the story of Andre Roussimoff better known as ‘Andre the Giant’.

‘Andre the Giant’ was a normal guy who had an extraordinary life. Well known for his outstanding wrestling career and his film roles including ‘The Princess Bride’ Andre was an incredible figure.

At his peak, he weighed 500 pounds and stood nearly seven and a half feet tall. But it was his huge imposing frame that he became so recognisable from is what ultimately became his downfall.

This graphic novel is the first substantive biography of one of the twentieth century’s most recognisable figures.