Storytelling and sport, a match made in heaven. But where does a bank come into it?

Over the past four years, AIB has been continually knocking the ball out of the park with their sponsorship of the GAA. They have utilised stories in different ways to build their brand and association with our national sports. This has seen then with awards both in Ireland and globally for their content and digital work.

In the past, we have seen these stories become national talking points. This year is no different.

This summer the team at AIB have two really strong content pieces, an online series ‘The Toughest Rivalry’ and their TV ad and retro computer game ‘The Toughest Journey’. These initiatives have truly brought their GAA sponsorship to life.

Ever thought you had what it takes to win an All Ireland medal? Now is your chance to prove it. 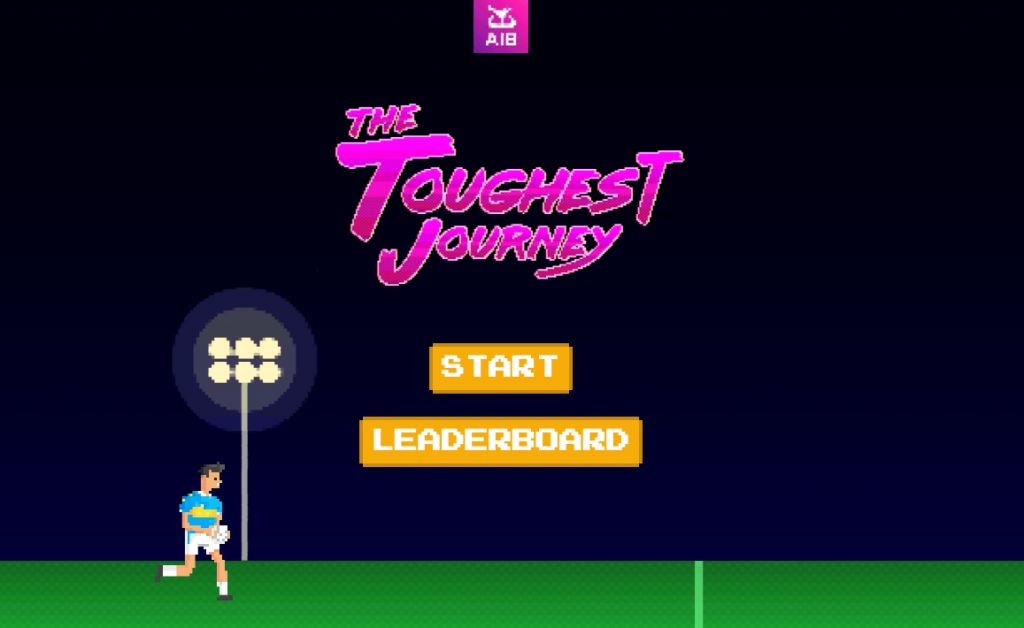 ‘The Toughest Journey’ is an online retro computer game where your football skills are put to the test.

Players have to complete challenges including skills training, weightlifting and nutrition. How they fair at the various tests will determine if they reach the All Ireland final, where they have a chance to win Sam and ultimately be put into a draw to win prizes.

The game allows players to live out their GAA dream while also invoking some nostalgia with its retro style and commentary.

It is a simple idea with a simple story yet it comes from the heart of the brand and packs a punch. Tapping into the childhood dream of people around the country makes this story engaging.

AIB are recognising Irish peoples passion for their national sport and allowing them to play their own part. They are becoming the lead characters in their own story, the man in the game.

AIB know how to make a video series. They have mastered the perfect recipe for a successful documentary series. The team behind these videos are using it again, this time with different focuses but still with the same success.

The first episode of AIB’s new series, ‘The Toughest Rivalry’, aired on 13 July.

The series follows Premier League Manager Harry Redknapp and former Sampdoria, Juventus and Italy striker, manager and World Footballer of the Year in 1995, Gianluca Vialli as they immerse themselves into the culture of GAA in Ireland.

Both Redknapp and Vialli will manage two rival GAA clubs. Vialli with Erin’s Isle in Dublin, and Redknapp with Castlehaven in West Cork.

‘The Toughest Rivalry’ will air until each Friday on AIB’s YouTube channel. The series will come to an end on 31 August when the two teams will come face-to-face in an epic match. Vialli and Redknapp have until then to use their expertise to improve and make a difference to their respective teams.

Again AIB is showing their storytelling prowess. They are following a tried and tested method of storytelling and have created a series that will keep audiences engaged and interested. Following two characters on their journey to overcome an obstacle and fight each other in a final battle. This is the age-old age example storytelling and one that works.

Here at All Good Tales, we believe that storytelling can help your business succeed. We’ve worked with the likes of Ancestry.com, Kingspan and DAA in improving their story. We’d love to help you with a free consultation. You can call Gaye on (01) 254 1845 to organise yours today. Alternatively, you can get in touch here.