A self-taught master of his trade, who is the man behind a cutting-edge design?

Joel Bukiewicz is the owner and operator of a Brooklyn workshop where he designs and crafts world-class kitchen cutlery for the New York City area and far beyond.

Starting his career as a fiction writer, Bukiewicz finished his first manuscript and started another, but when he couldn’t find an agent for the novels, he turned his creative attentions elsewhere.

He started making furniture, jewellery and even canoe paddles as a gift for his father. After many intricate projects, he wanted to try make something familiar, something that was everyday and simple. When doing a stint in Georgia on his 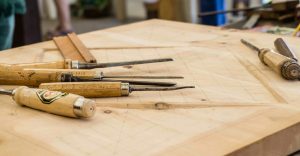 parent’s farm, Bukiewicz picked up a rusty old bar of steel from one of the equipment sheds, took an old belt grinder that belonged to his grandfather, and tried to make something that looked like a knife.

With a relocation back to New York, Cut Brooklyn was born.

For the first five or six years after Bukiewicz opened his business, he never visited another knifemakers shop. His method of grinding and making the knives was learnt after a long period of trial and error.

His knives are now famous globally, and he has a waiting list about a decade long. (Slight exaggeration, but it is over the year mark). He’s a master at his craft, and the fact he’s self-taught is all the more awe-inspiring.

With the bigger knives taking between 10-12 hours to complete, they come with a lifetime guarantee. Bukiewicz wants to create a product that can be picked up a hundred years later and still be of use.

It is evident that people are intrigued by his story, and even more impressed by his products. He has featured in numerous publications such as The Daily Beast, CNN, and The New York Times to name just a few.

Joel Bukiewicz is proof that with hard work, dedication and a flair for creativity, anyone can become a master in their chosen trade.

Want to see more of the man in action? Check out this short feature film below that outlines Bukiewicz’s story, vision and absolute precision for his craft.

Credit to Made By Hand for the video.