Come for the scenery, stay for the story. Learn how Fáilte Ireland’s passion for stories fuels the Irish tourism industry. 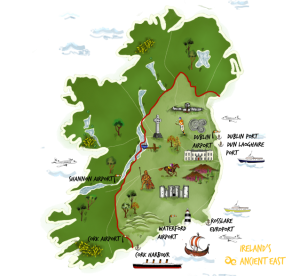 Fáilte Ireland uses many best practice tools and strategic tactics to promote Ireland overseas. However, their most effective tool is their ability to tell a story. Jenny De Saulles, Fáilte Ireland’s Head of Ireland’s Ancient East, spoke on the importance of storytelling for the brand:

“Visitors relate to stories and interesting people – something we have in abundance within Ireland’s Ancient East. Bringing our past alive for the overseas tourist requires knowledge of what they expect and the best ways to reach them.”

Below, find out how Fáilte Ireland uses storytelling to promote the Irish tourism industry, whether it be through battle-hardy Vikings or talking statues:

In 2016, Fáilte Ireland rolled out a domestic marketing campaign with a telling tagline—“Great Story’s Stay With You Forever”. As part of this campaign, Failte Ireland also released an exceptional TV ad.

In the ad, a Father tucks his Son into bed, with a storybook open in hand. Without warning, they’re in Co. Kilkenny’s Dunmore Caves. A bearded Viking proudly unsheathes his sword. Clashing blades resound throughout the cavern interior. The Father turns off the bedside light.

Later in the ad, when the Father and Son have a mock swordfight in Athlone Castle, you get the sense that their fight is just as exciting as the ancient battle from their storybook. Clearly, Fáilte Ireland doesn’t just recite the story of Ireland’s Ancient East. Instead, they bring you into it.

Leinster has a wealth of stunning heritage sites, but they really stick with you once you’ve heard the stories behind them. Fortunately, Fáilte Ireland’s passionate storytelling means there’s plenty of opportunities to engage Ireland’s ancients sites on this level.

Ireland is a nation of natural storytellers, and Fáilte Ireland definitely makes use of this fact. Last year, they launched a new initiative, called ‘Dublin’s Talking Statues’. As part of this initiative, Fáilte Ireland installed QR codes on ten statues across Dublin. Today, tourists can scan these codes to receive a monologue from each of the statues. 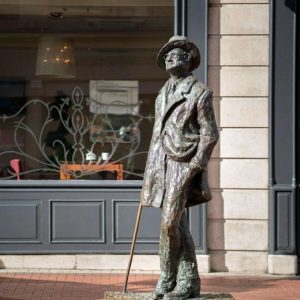 Each statue’s monologue is written and performed by an esteemed Irish writer and actor. For example, James Joyce’s monologue, written by Roddy Doyle, is animated by Gabriel Byrne. Other notable contributors include actor Brendan O’Carroll, playwright Enda Walsh, and author Eoin Colfer.

It’s easy to miss these statues while plodding down Dublin’s busy streets. Fortunately, because the monologues are only available through their QR codes, tourists must visit the statues up close and in person.

Once tourists are at the statue, the strong storytelling and passionate performances do the rest. Yet again, Fáilte Ireland expertly uses storytelling to connect tourists with Ireland’s historical monuments.

Fáilte Ireland has produced a booklet — called Ireland’s Ancient East: A Toolkit For Storytelling Interpretation — that outlines their best practice for storytelling. This helpful booklet includes four key tenets towards achieving the ideal approach to storytelling.

Focus on the audience

When you know what your audience wants, it’s much easier to design an effective story. Tailor your story to your audience for the biggest impact.

Highlight people, rather than facts, figures, and dates

People, actions, and relationships are more emotive than facts, figures, and dates. An emotionally charged story is more likely to get a message across than an amassment of dry statistics. Avoid raw data — it’s better to include something more personal.

Hinterland is an arts and literature festival based in the original home of Ireland’s most famous book, The Book of Kells! Plan your visit to Kells, Co. Meath from the 21st-24th of June. https://t.co/YUpPiuKKhN #IrelandsAncientEast @HinterlandKells pic.twitter.com/rgqDWrNDxl

The goal of any good story is to evoke empathy. Stories are delivery tools for difficult messages. However, without empathy, audiences are likely to reject these messages outright. For this reason, it’s important to establish a common ground between your audience and your story.

Forge atmosphere and sense of place

Storytelling isn’t just about the spoken or written word — it’s also about the setting. This is especially true for heritage sites and tourist locations. If the setting isn’t convincing, the story won’t be either. So, make sure your setting is distinct, comfortable and complementary to your story (and vice versa).

Through good storytelling, Fáilte Ireland is able to keep Ireland’s vital tourism industry alive and thriving. It generates growth in visitors, revenue, and jobs around the country.

Fáilte Ireland’s unique approach to storytelling makes for memorable tourist sites. By bringing emphasising the relationship between story and setting, and by bringing its audience into the story, Fáilte Ireland has elevated Irish tourism to new heights.

Here at All Good Tales we are doing great work for brands like Kingspan, Ancestry.com, and daa, to name just a few. We are building brand newsrooms, executing exciting PR strategies, and training key staff how to source, structure and tell great stories. For more information please click here or call Gaye on (01) 254 1845.