When you set out to live creatively, what can you achieve?

Mickey Smith was born in Newlyn in Cornwall, England. Growing up he spent as much time as he could by the sea. His formative years revolved around the Atlantic cost of West Cornwall. Music also played an influential role.

Mickey credits his mum with instilling the sense of free-flowing adventure in him. As he grew older, making decisions on the flip of a coin quickly became a way of life for him. He spent years living a nomadic lifestyle, surfing and playing music around the world. Never spending too long in one place. 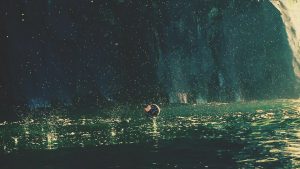 Experimentation with cameras led him to photography and videography. He quickly developed a natural instinct for documenting the sea. A place he had grown up around and where he spent much of his time.  It wasn’t long before Mickey’s work began to gather momentum and was picked up and published in surfing magazines. This way of life suited him. Traveling from place to place, surfing whenever he could and making money through his lens.

In an interview with huck in 2012 spoke about how big an impact his sister’s death had on his life. He lamented how she had complained about seeing his photographs in surf magazines accompanied by writing about the people in the photos. Cherry wanted more of a focus on Mickey. She wanted to know he was doing what he was doing and what his motivations were. She wanted the man behind the lens to come into focus.

In the same year as his sister’s death, Mickey produced the Dark Side of the Lens. Inspired by the wishes of his sister, this was a film that showcased Mickey’s refreshingly honest take on the magic of the ocean. The imagery and the narration provide viewers with a unique insight into Mickey’s relationship with the sea.

The video was filmed off the West Coast of Ireland, known for it’s large and often brutal waves. The film represents Mickey. You experience his movements, how he feels and what he is thinking. He delves into discussions about childhood and about life. The video brings you along for the ride.

The monologue also documents what’s going on behind the camera, the place no audience can see. The “dark side of the lens”.

Although rather unintentionally, the video was a success. It attracted international acclaim and won multiple awards. In 2012, Mickey was one of 18 international directors selected for Saatchi & Saatchi’s new directors showcase at Cannes. A prestigious event and a monumental achievement for the young surfer from Cornwall.

Today, Mickey’s success has not changed him. He shies away from praise and does not want the “legend” status many have bestowed upon him.

He still works as a photographer and videographer. Mickey also works as a musician, music being one of his other passions in life. He works with the musician Ben Howard as a multi-instrumentalist and has toured extensively as part of his band. Mickey has also collaborated with Ben on many of his songs and albums, including Ben’s second studio album “I Forgot Were We Where”.

As he says in his video, Mickey is committed to living his life doing what he loves. He is creating a powerful presence and wants to spend his life doing something worth remembering.

His mission to live creatively has seen him produce beautiful, thought-provoking content which inspires others to live a creative life.