Brandon Stanton is an American bestselling author, photographer, and is most recognized for his world renown blog, Humans of New York– or HONY as he likes to call it.

Stanton started his career as a Bond trader in Chicago, and on weekends would find happiness in taking photographs of the landscape around the city. After he was fired from his job, he packed his bags and moved to the greatest city in the world—New York. 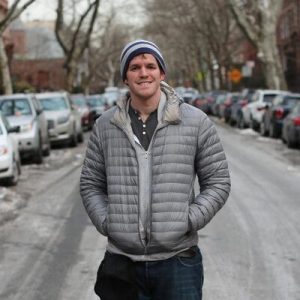 He decided to follow his passion for photography and set an initial goal for himself to photograph 10,000 people around New York City. At first, the idea of photographing strangers intimidated Stanton, but with the determination to reach his goal, that fear soon faded.

At the start, Stanton would take 10-40 candid pictures a day and would post them to both his personal website and his social media pages. Although his personal website didn’t get much attention, his social media pages were flourishing with likes, comments, and shares.  Noticing the attention he was getting, Stanton decided to add words to his pictures, stories behind the images, thus creating the phenomenon of Humans of New York.

Today, the Humans of New York Facebook page has almost 18 million followers and counting. However, the HONY empire has reached far beyond the Facebook world, and even further beyond the borders of New York City and its boroughs.

Humans of New York started its own website where it publishes all its blog posts, and shares previous and upcoming adventures that Stanton has planned. His work is also featured in two New York Times best sellers, “Humans of New York”, and “Humans of New York: Stories”. In 2013, he also made the Time Magazine “30 people under 30 changing the world”. 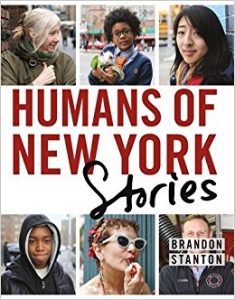 After a lot of time photographing the “random New Yorker”, Stranton began to get creative with his posts and started incorporating various themes to his work. He started a series within his blog that focused on diverse social and political issues affecting people around the world. These included inmate stories, pediatric cancer stories, and refugee stories, to name a few.

“I asked her out during a movie. I was really nervous, so I executed with about half the talent level that I could have. I accidentally…" pic.twitter.com/hnlLLCF0vI

When this branch of his blog received positive feedback, he decided to widen his camera lense and took his blog around the world. He traveled to countries like Pakistan, Iraq, Kenya, Ukraine and India where he collected the life testimonies of many different individuals. The stories he collected from these places were of people facing different obstacles than the ones Americans were used to hearing about. By taking his skill of storytelling international, Stanton was not only able to expand his network by thousands, but was also able to connect to people around the world and raise awareness and empathy in all of his followers.

Through all of his success, one thing is for sure: Brandon Stanton knows how to tell a story.

There is much more to his blog than the pictures that he takes, and a lot of his success lies within the words that he attaches to them. The stories behind the pictures bring them to life and set an atmosphere for his blog that fascinates the public, and keeps them coming back for more.

Santon once said, “The general tone of the site is one of genuine interest and compassion and maintaining that spirit is the only reason Humans of New York survives.”  In order to preserve this status, HONY always makes sure to put good storytelling at the heart of everything that they do.

In order to obtain the information thats makes this all possible, Stanton asks permission to photograph an individual, he snaps a picture, and he tells them about the blog that they will be part of.

He then engages in conversation by asking one of two questions, “What is your greatest struggle?” or “Give me one piece of advice”.  Although these questions are quite broad, the answers open doors into the personal depths of these strangers lives.

Stanton said, “Their individual stories reflect on different facets of the human experience, from struggles to heartbreak to inspiration”.

When writing HONY posts, Stanton makes sure that he embraces the human that he is telling the story about.  By using a real person’s experience, Stanton takes an abstract issue that could mean nothing to the general public, and turns it into something relatable by creating empathy with its readers. By doing this HONY followers are able to emotionally connect with the person in the photograph through its storytelling.

“My mother lost her eyesight slowly. At first her eyes began to change colors. The doctor told us that she needed a surgery, and I promised her I’d get the money. It was my dream to save her eyesight. I did some repair work. I helped our neighbors with…" pic.twitter.com/4c8YxkCuUe

Stanton also tries to accentuate the positive in his storytelling. He knows that people really connect with emotion, and the stronger the emotion, the better. His blog has taught him that content with strong emotion is more likely to be shared. Although negative and positive content can both spark emotion, HONY have proven that positive emotion is more viral than negative.

By connecting with their readers through storytelling, HONY creates a following of people who are more compassionate and empathetic to people and the world around them.  Stanton has been successful in creating a culture of followers who are there to listen and learn from his stories, rather than judge the people they’re about.  Because of this, strangers are more willing to open up and share with the world.  “I can exist without the audience” Stanton says, “but I can’t exist without the people telling their story.”

As long as people are willing to share, Brandon Stanton will continue to tell their stories through Humans of New York.