Storytelling isn’t just entertainment, it’s a way to protect your heritage and culture. A lot of cultures have rich storytelling traditions that are unique to their culture.

In this series, we explore the importance of traditional storytelling, and the storytellers that tell them, across various cultures.

In pre-European times the Maori preserved tribal lore by teaching it to a certain number of young men. The institution was known as the whare wananga and whare kura. They were the people of the Maori that were responsible for keeping and reciting the oral history of the tribe.

These men were tasked with sharing the lore to the young men selected as pupils. The subjects taught may be classified as high-class ritual and lore; historical and other matters of less importance; and the arts of black magic.

Those taught what was termed as high-class matters, such as the higher form of ritual and old cosmogonic myths, would have nothing to do with black magic. The teaching of the art of the warlock was taboo, and no person not engaged in either teaching or learning was allowed to be present.

In some cases the instruction was given at some secluded spot away from the village. In others the lessons were conducted in a house that the public had no access to.

The name of this house of learning was “Whare-kura,” a name which is often used as a synonym for whare wananga. This house kept all the tapu knowledge of the three “baskets” of the wananga, or esoteric lore obtained by Tane from the Supreme Being.

Another house constructed by Whiro, and named “Tai-whetuki,” was devoted to the conserving of all noxious ritual, arts of black magic, all arts and knowledge pertaining to evil and death.

The Maori believe that man has always constructed and utilised these houses of knowledge, even when the arrival of Europeans broke down ancient customs and practices. In whatever lands the Maori of yore travelled to, such places were utilized, and the priestly experts who presided over them became the keepers of tribal records and national history.

In the settlement of Polynesia the Maori was compelled to dwell in isolated far-sundered communities, and then each one had to preserve its own lore as it best could. Some communities seem to have succeeded much better than others.

In New Zealand the institution was kept up faithfully by the principal tribes. The Takitumu folk of the eastern side of the North Island were perhaps the most advanced in regard to this mode of preserving knowledge: Some of the whare wananga were famous for many generations; such as the “Ra-wheoro” at Uawa.

In such cases the actual house was rebuilt when it fell into disrepair, for it was not a Maori custom to repair a house. In other cases the whare wananga was but a name and a system; no special house bore the name, and the knowledge to it might be taught in the open air or in any house set apart for the purprose. 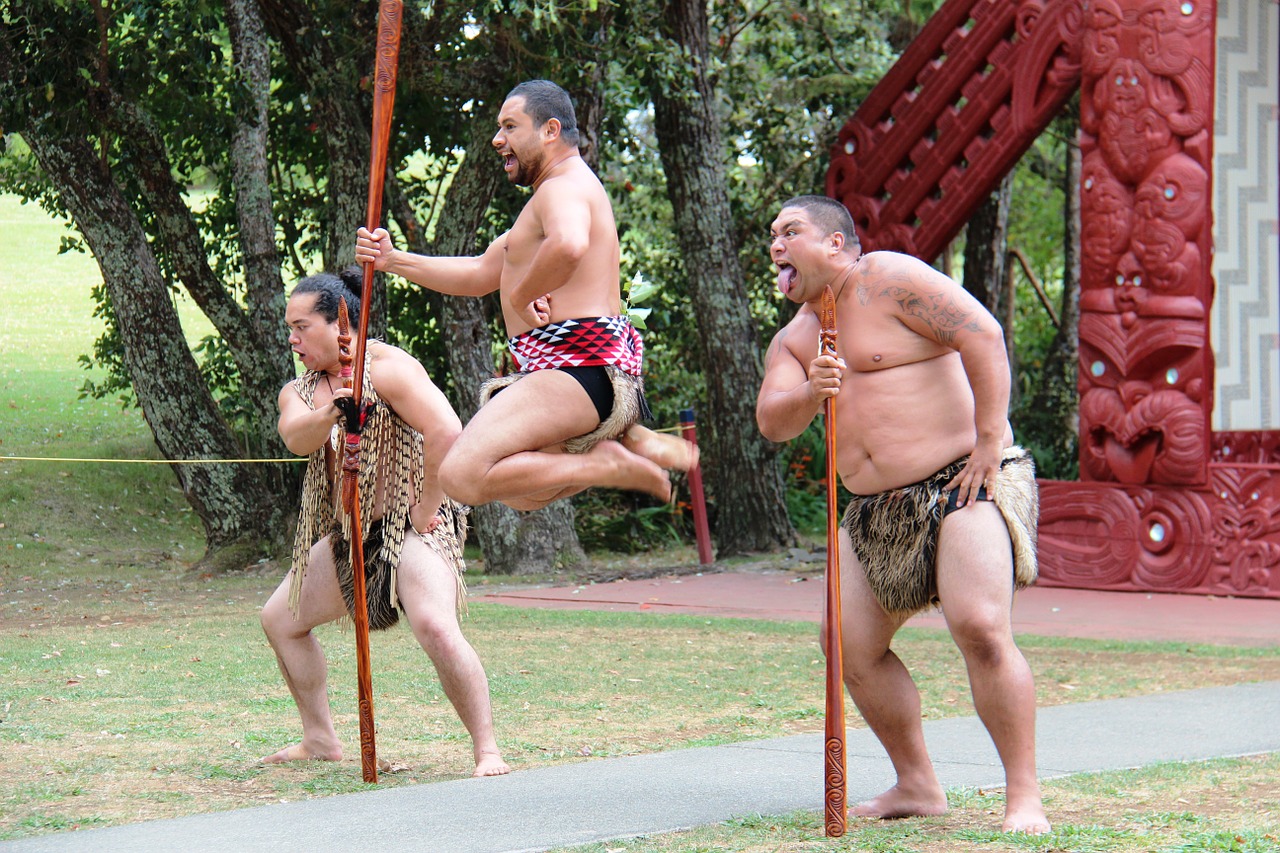 Oral storytelling is where history, religion, myth and art come together. The myths and heroics of their gods are brought to life with extravagant performances drawn from song, chants, props, traditional garb and more. It’s a very deeply emotional experience to witness traditional Maori storytelling.

The most critical components of Maori oral storytelling often involve the delivery of voice, gestures and facial expressions which convey the tone and emotion surrounding the story. Telling a story was almost never direct, but a drawn-out and complicated process, often involving many speakers.

Oral storytelling was often performed in a traditional tribal meeting place, such as a central building or open area in the village. It was an important place and new guests would often be welcomed in with a song (the karanga).

Like many native peoples, the culture of the Maori people was highly oratory. Much of their storytelling revolved around composing, memorising, and performing all different kinds of poems, war chants, laments, and prayers. They were often thought to have a highly figurative and often rare poetic beauty. The oral production also had a definite religious element to it–seeing as it was believed that both language and knowledge had been acquired from the gods, religious ritual often played a large part in these productions. Within all of these poems, songs, chants and prayers, they formed and cultivated their own mythology to record their past and tell the legends and stories of their gods and tribal heroes, like the story of Kupe discovering Aotearoa.

The storytelling methods of the Maori were rarely direct. They did not rely on or use solid concepts and direct ideas. Instead, they used all kinds of imagery and fantastical elements to both understand their history and convey it to others. Therefore, their songs, myths, and prayers endure as a living record of their collective tribal memory.

In Maori, traditional songs are called waiata. There are three different kinds of waiata: the waiata tangi, laments for the dead or lost; waiata aroha, songs about the nature of love, as well as familial love and kinship; and waiata whaiaaipo, songs for courtship and romantic love.

As well as these, there are songs of lesser importance: pao, which were songs of gossip; poi, songs that accompanied traditional dances; oriori, songs of heritage composed for those children who would be heirs; and karanga, a chant sung or performed by the women of the tribe in order to welcome visitors to their tribe.

Apart from traditional songs, there are also various types of chants that are recited as opposed to performed. The karakia, invoked the power of the gods to assist or protect the chanter; the paatere, chanted by women in order to address or rebut against slander or gossip; and kaioraora, chants directed at an enemy to express abuse, hatred, and promise of terrible revenge. The most famous of all is a war chant accompanied by fierce gestures, expressions, rhythmic movement, and stamping. The haka sometimes included stylized violence, and the stunning and intimidating nature of these chants has made them some of the most famous among the Maori oral traditions today.