Stories have special powers. Not only are they entertaining but they are also ways to communicate morals, lessons and culture. They use magic in the form of oral and written tales to transport the listener to a new world that will stay with them forever.

In this series, we explore the importance of traditional storytelling and the storytellers that tell them, across various cultures.

In Marrakech’s famous Jamaa-el-Fna square there is a rich variety of storytelling traditions. The halca is the circle of listeners and spectators that forms around the halaiqui (storyteller) as he starts his tales in the hustle and bustle of the night market place.

The Moroccan tradition of storytelling dates back over 1,000 years to a time when Marrakech was a young city. Berber general-kings governed the land and Morocco was growing rich from the gold and spice trade. Storytelling was a way to pass on cultural beliefs, teach children moral lessons and serve as a form of entertainment on long winter nights.

People’s interests have been changing due to globalisation and the influence of technology. It seems as though no one is interested in family gatherings after dinner, which is traditionally when the hikayat took place. Grandparents or parents would tell tales to each other and their children during this time.

Previously, the art of storytelling (Hikayat) was found in cities all over Morocco, but today Marrakech’s Jamma el-fna’s square is one of the last places to find these old stories.

Ahmed Ezzaghani is a master of storytelling in Marrakech and began collecting Moroccan traditional fables during his youth as a travelling salesman. He joined the crowds gathered around storytellers until one day he had studied the craft long enough to tell stories himself. Today, he trains a group of youth apprentices so they may keep their rich Moroccan heritage alive. 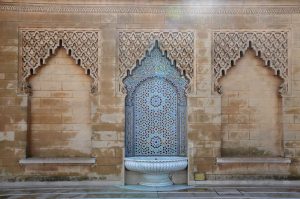 Learning from the Masters

But with Marrakech’s legendary square filling up with vendors, juice stands and traffic, there is less room for the great storytellers to hone their craft. With public spaces around Morocco becoming more difficult locations in which to perform, these artists are shifting to cafés and cultural programs. The new locations are bringing Moroccan stories to a wider, more diverse audience.

Many young Moroccans are determined to reinvigorate the tradition. There’s a saying in Morocco that when a storyteller dies, a library burns. To prevent these living libraries from being lost as the older generation retires or passes away, these younger apprentices are learning from Master Storytellers at apprenticeship groups. Later, they’ll take the stage to share traditional tales with foreigners and Moroccans alike. These young people understand the importance of celebrating the tradition of hikayat.

A Respected and Honoured Tradition

Moroccan stories have simple names reflecting the oral tradition. The King and The Thief; The Lion, the Hedgehog and the Donkey; The Teacher and The Woman are three very common stories. They’re similar in style to parables, illustrating moral or spiritual lessons. Throw in a good dose of drama to keep it entertaining and a couple of Moroccan jokes to keep it light (they do sometimes get lost in translation), and storytellers can keep crowds entertained for hours.

It’s Not (Just) About the Story

A traditional storytelling evening is not just about the story, it’s also about the listener’s experience. Because Moroccan storytelling developed as both a form of entertainment and a way for elders to teach their children, it’s an intimate affair. Whether at the square or in a café, listeners huddle close around the storyteller to catch every word and gesture.

At the Jamaa el-Fna, you can still catch many of the sage Masters working their magic to crowds of transfixed listeners. Storytellers work nightly at the square. All stories are told in Arabic and it’s customary to tip the teller a few dirhams.