Myths and legends are an important part of many cultures around the world. While today we see them as entertainment, for generations they have served as a way of teaching valuable lessons. 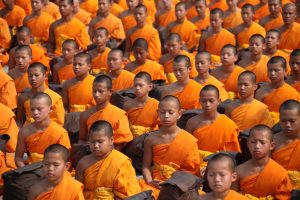 Thailand is a country steeped in myth and legend, with a storied history of ancient kingdoms, terrifying ghosts and national icons. Folk tales and legends in Thailand were used by elders to instill beliefs in the younger generation. Most stories contain moral lessons teaching the importance of following traditions and to display reverence to elders, parents and superiors. The stories of the spirit world taught children to be cautious, to stay at home at night and to respect customs regarding death rituals and the importance of offerings.

An important figure in Thai folk religion is the mo phi  or shaman who would also conduct rituals. A class of priests they were specialists in communication with their personal angels and gods in general. Using trances, sacred objects instilled with supernatural power  and rituals like, the shaman is often consulted during times of trouble, hauntings, and illness or other misfortune that might be caused by malevolent or unhappy spirits. They are also usually present during religious festivals.

Thai folklore is a diverse set of mythology and traditional beliefs held by the Thai people. Most Thai folklore has a regional background and a lot of the stories originated in rural Thailand. With the passing of time and through the influence of the media, large parts of the Thai folklore have become interwoven with the wider popular Thai culture.

The core of Thai folklore is rooted in folk religion. Until they were recorded, folk beliefs were handed down orally from one generation to the next.

Many Thai folk tales are based on the tests of Buddhism. Also some of the stories of classical Thai literature such as Khun Chang Khun Phaen and Lilit Phra Lo, a story about young lovers with a tragic end, originated in folk tales.

Throughout Thailand there are also local folk stories connected with particular geographic features, such as the story of Doi Nang Non (the Mountain of the Sleeping Lady) . According to legend, the mountain takes its unusual shape from that of a sleeping lady. A beautiful princess was betrothed to a man who ran away, leaving her pregnant and alone. She waited for him, and went looking for him, fearing him lost. After walking for several days, she collapsed to the ground, and realising he had left her, cried out in despair  before dying. AS her ghost left her body, it grew to a large size and eventually become a mountain rang that’s today called Doi Nang Non–or the mountain of the sleeping lady.

Spirits or ghosts are known generically as phi and they are a very important part of Thai storytelling. They may be found, among other places, in certain trees, burial grounds near Buddhist temples, some houses, as well as mountains and forests. Spirit houses are small shrines built near these places to house the spirits of that place. It is considered a bad omen to neglect these spots and offerings are regularly made by people living nearby. 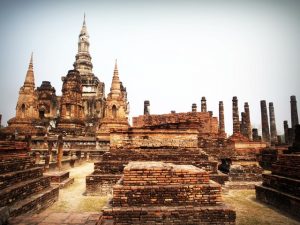 Most spirits were traditionally not represented in paintings or drawings, hence they are purely based on stories of the oral tradition.

Animals are also an important feature in Thai folklore. Snakes are popular and depending on the background of the take or myth, they have different meanings. Nak Nagas features in some stories of local folklore and are represented as well in Buddhist temples. Male lust is often popularly represented as a snake growing on top of the head of the lustful man. THai folk mythology also includes the idea of a link between snakes and women.

Today, traditional celebrations take place all over Thailand, including Buddhist festivals, provide an opportunity for the expression of local folk beliefs often with a strong storytelling strand.

Here at All Good Tales, we believe every brand has a story to tell. Unsure of how to tell yours? We’d love to arrange a consultation. You can call us  on (01) 454 0090 to organise yours today. We also run one day courses that give you practical information on connecting with customers. For more information or to book a place, click here