St Patrick’s Day is a major milestone for our client Ancestry.

We wanted to create a story around Irish heritage and the diaspora around the world, while promoting Ancestry’s DNA test. We worked with the Late Late Show – Ireland’s most-watched weekly TV programme, to create a fascinating and entertaining segment on DNA and family history. We gathered some of Ireland’s most familiar faces to find out how Irish they were, and where their DNA reaches.

The results were surprising to say the least…

So how did this story begin?

We had marked St. Patrick’s Day as a major media opportunity for Ancestry. What’s more Irish than our obsession with the weather, and love for Father Ted, it it of course the institution that is The Late Late Show. The Late Late Show brings in record numbers of Irish audiences each week, and is the second longest running TV programme in the world, it would no doubt be Ancestry’s biggest TV opportunity here in Ireland and St. Patrick’s night was the perfect fit.

The simple joys of sitting in with my parents by the fire, cuppa in hand, and the #LateLateShow on 👵🏼 Enjoyed the show tonight @RTEOne!

We have had some impressive results already from our work with Ancestry like our campaign around the Catholic Parish Records and the Police Gazettes, but from our initial strategy sessions with the international PR team and senior management, we knew that DNA kits were a major focus area for 2017.

After a relaxing time off for Christmas, binge-watching Netflix and eating tins of roses (avoiding the orange ones obviously!) we returned to work ready to win over the Late Late Show.  Luckily it took little convincing as the story was so strong. It had all the elements – timely, informative, entertaining, and a little off the wall.

By the end of January The Late Late Show were in, Ancestry were in, and it was all systems go.

We got the green light – what next?

To get the most out of the segment for Ancestry and the audience we planned an interview with host Ryan Tubridy, four well known faces, and a live DNA reveal on the night. To make this work we compiled a shortlist of people that varied in backgrounds, ages and gender, from politicians to pundits. Knowing that the DNA tests can take a bit of time we travelled around the city and country to get our DNA samples, sitting with celebs while they had to spit into a tube – the glamour of TV.

While the results were pending Ancestry’s historians got to work on making family trees for the guests, looking for emigration patterns, people of interest, and communities.

How to prepare for live TV with half a million eyes on you?

Mike Mulligan is an expert in genetic genealogy and an excellent communicator, but live TV can be daunting. We prepped Mike in media training sessions, and run throughs in the lead up to the show. With the Late Late team we worked on the best way to reveal the results, and how to give our surprises on the night the most impact. DNA can seem technical we wanted to ensure that everyone would understand the science behind the product without being confused or intimidated. We also wanted to show patterns in Irish immigration and the genetic spread, while still making the interview conversational.

There was an awful lot of data to share with the guests and the audience so graphics assisted Mike when explaining these trends and results.

We created a compelling piece of TV, that got a lot of laughs, a few sly digs and a generated a huge amount of interest in Ancestry and DNA.

The piece got people talking about DNA in a casual way, and brought Ancestry into the homes of the nation, and of course, there was a kit for everyone in the audience. Twitter lit up with people laughing about Michael Healy-Rae’s Cork connection, Maura Derrane’s familiar cousin, and Jason Byrne’s links to India.

Popular show Callan’s Kicks did a Patrick’s Day special and took off the show. You know what they say, the most sincere form of flattery! 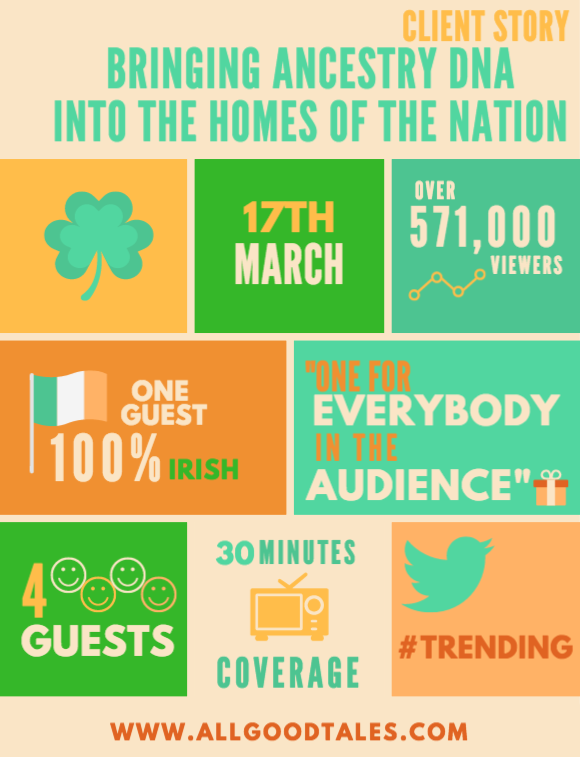 Did you see Ancestry on The Late Late Show? What did you think?

Would you like to find out more about our Public Relations services? Get in touch here for a chat.