They are one of the original Seattle alternative rock bands and by all accounts, they had the name first. Although the names had been a cause for some hostility, the band put their grievances behind them and partnered with Zendesk.

They recorded an anthemic concept album of “epic proportions”. On the surface, it’s a collection of songs about customer service. Underneath, it’s about so much more.

If you have not seen Zendesk Alternative on one of their many tours it’s probably because, as you may have guessed, the band is not real.

A marketing ploy by Zendesk, the band and their story are fictional but impactful.

Who is Zendesk Alternative?

Instead of doing a promotional video detailing their work, Zendesk created Zendesk Alternative. A fictional indie rock band who had the Zendesk name first.

The band has it’s own website and social media pages and takes on a life of its own. On their website, you can look at upcoming tour dates which are always “coming soon”. Or purchase some merch which is always “sold out”. They must be very popular.

Zendesk Alternative, although having toured extensively and headlined many festivals, is now struggling. Their one last hope of success is to partner with the company who stole their name.

The band comes together to write the biggest hit of their careers, a cheesy jingle about the importance of customer service. With lyrics like “Customer service, it might make you nervous” it’s sure to be a hit.

Customer support software can be interactive, engaging, colourful and of course useful but how do you make it fun?

Creating a human reaction and making your brand likeable and trustworthy is something all types of companies struggle with. SaaS companies most likely feel this pain more than others as they struggle to transform their software into engaging content. 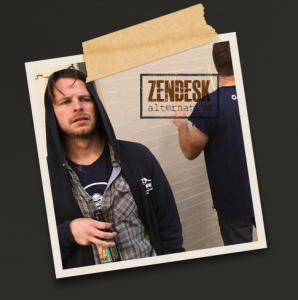 Zendesk have been unique in their efforts to do just that. They’ve taken on a persona and developed a fictional story to help them connect with their audience.

Taking on this new persona has allowed them to explain who they are and what they do in an easy and engaging way. They have created characters that audiences can either or hate and a story that is so different from their own service that it works.

It also succeeds in making Zendesk likeable. As an audience, you can see the brand’s character. They’re funny and game for a laugh. While you want the SaaS service to perform its duty and work for your day-to-day needs, you also want to like the company you’re dealing with.

This video allows Zendesk to achieve just that.

Here at All Good Tales, we believe that storytelling can help your business succeed. We’ve worked with the likes of Ancestry.com, Entekra and DAA in helping them tell their story. We’d love to help you with a free consultation. You can call Gaye on (01) 254 1845 to organise yours today. Alternatively, you can get in touch here.